What happens when a Taurus man goes quiet?

You wonder if you are the reason behind his silence. Well, this guy is good at hiding his feelings; hence, it’s hard to realize when he feels hurt. For those who are in a relationship with the Taurus male, you surely get frustrated because he barely shares his problems.

Sometimes he makes you feel that you don’t understand him at all even though you two are partners.

His silence can create cracks in the relationship and soon push his heart away.

So, how to deal with it?

Keep track of the following ideas…

5 Things a Taurus Man Does When Going Quiet 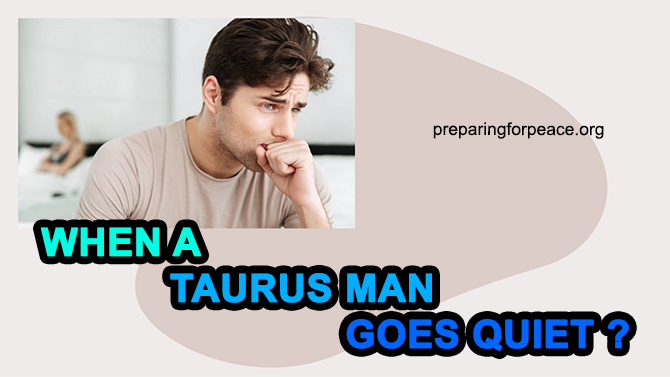 This guy is known as a calm, tolerant, down-to-earth, and patient person. The thing is that he will get sensitive and overreacting once being hurt. Let me remind you that he is also hot-tempered and stubborn. He can go mad at times without any signals; this explains why Taurus tends to hold grudges for awhile.

Let’s see what he is going to do while staying silent:

1. He will ignore you

Taurus man is likely to stay quiet when he gets annoyed. Normally he is not good at expressing his thoughts, so it’s not surprised if he doesn’t want to talk about what makes him irritated. As a result, he ends up with ignoring you.

See also signs that a Taurus tests you here!

How does he act when he is upset?

Your Taurus lover will turn off and pull away, and things will be back to normal as soon as he calms down. Short-tempered and stubborn, he needs a moment to think things through. If you find him quieter than usual, don’t quickly conclude that he’s no longer interested in you. In fact, there’s a lot of stuff going on inside his head and he has to put them in order.

This means Taurus man may not really withdraw from you if he’s quiet. Just read his emotions and give him space to think. Never bombard him with tons of questions about why he stays silent because he requires privacy at the moment.

Simultaneously, you must slowly try to draw him away from his emotional self in order to find out the true reason disturbing him. As his partner, maybe you want to have a deep conversation with him and help him open up about the issues troubling him. But of course you need much effort and please wait for him to calm down and be completely ready first.

It’s a BIG no if you pressure him to tell his story.

2. He will lose his patience

Your Taurus male tends to be impatient as soon as he goes quiet.

A typical Taurus man is pretty patient compared to others. Nonetheless, he will become an impatient and intolerant person when he gets angry. Due to that, he wants you to answer all of his questions quickly. If you are hesitant and indecisive, suspicions will show up in his mind making him irritated and mad.

This Taurus guy will definitely piss if you don’t fulfill any of his expectations. For example, you fail to take action when he asked you to do something. In case he feels that you don’t understand him at all, he will appear unreasonable and impatient.

3. He doesn’t answer your calls or messages

Well, this is basically what a guy does if he’s in the silence mode. Taurus man is not an exception; hence, don’t be surprised if he doesn’t reply to your phone calls or messages.

You all know that Taurus male is not good at expressing his feelings through words. Therefore, he doesn’t really want to call or send you messages, especially when he’s upset. On the other hand, if he’s in his best mood, get ready to answer all of his coming texts and calls because he can’t help wanting to know how you are doing.

A Taurus man in love is hopelessly romantic and passionate.

If he stops contacting you one day, it’s a certain sign that something or someone is annoying him. Don’t freak out if he suddenly doesn’t say a word with you or just chats through text message if necessary.

I need you to stay calm and find an appropriate moment to ask him honestly about what is bothering him.

4. He will hold a grudge

Did you do anything wrong to him?

Take a moment to think of your attitude and behavior towards him. If you really did something hurting him, issues will appear in your relationship. Taurus man, influenced by his zodiac sign traits, finds it hard to forgive past mistakes.

When I say he holds a grudge, I really mean it. When he recalls about events that you made him feel offended in the past, he’s gonna re-experience a vast array of negative moods (angry, annoyed, and agonized) all over again.

5. He asks for his private space

As mentioned earlier, Taurus man needs some time to be alone.

Actually he usually requests for his privacy even when he’s happy. This guy loves spending time for himself. When he goes quiet, he thinks it’s better to stay alone and immerse in his own world. Don’t try to invade his own space or he might throw his anger to you, and arguing is the last thing he wants to do.

For those who currently have conflicts with Taurus men, all you need to do is to leave him alone in his space. His hot head requires a long time to think and cool down, and he will come back once feeling better.

Now you already know what he’s gonna do when a Taurus man goes quiet.

He is not the type of person that likes showing his feelings. Because of this, it’s hard for people around him to handle him or tell when he is upset. The information above will partially give you more ideas to figure out what is happening in his mind.

In general, he is not a dramatic guy so this won’t happen many times. Taurus never likes playing games and has not enough time to make a simple matter become a big mess.

Try to understand that he is slow-paced and usually handles things leisurely.

Give him patience and sincerity if you want him to open up.

Just be the real you, stay confident and he will see you at the right partner for his life.