Is Taurus man testing you?

When it comes to finding a partner, who doesn’t want to be with someone trustworthy and dependable, right? Taurus man is not an exception! Influenced by his zodiac sign’s characteristics, this guy is claimed to be stable, reliable, and down to earth.

Especially in the romantic life, his partner must be caring, loving, and loyal to him only. He doesn’t want his relationship to go wrong; that’s why he will test you to ensure that you’re the right one.

Learn more in the following…

3 Signs Taurus Man is Testing You 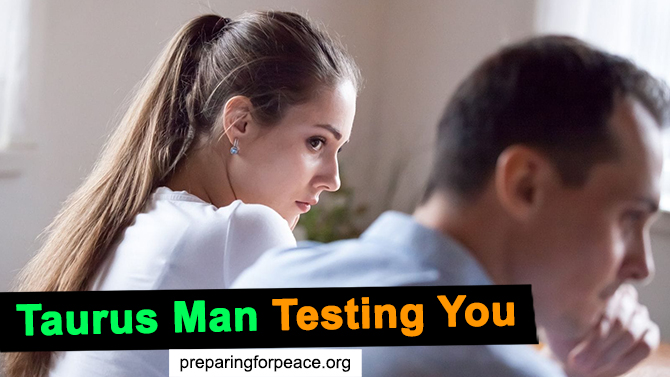 Testing you doesn’t really mean he has no trust in you. It’s just that he wants to make sure that he is using his precious time with his true mate. Taurus man in love is full of affection and tends to give his everything to the significant other. No wonder he has to be careful, or he will be used.

Once deciding to be in a romantic relationship, deep down he’s already prepared for settling down. If you just look for someone to play around, then the Taurus male is definitely not a choice.

First of all, have a look at common ways Taurus man is testing or may test you.

1. He asks you to make decisions

Well, making decisions is not an easy task, but this is the first way Taurus man wants you to do because he needs to know if two of you are truly compatible.

Though he is ruled by a sensual sign, he cares more about the long run than quick attraction. Putting the lustful part aside, he needs to know if you prefer the same things like he does or unwillingly accept them because he’s selected or organized.

Get tips on making Taurus man to miss you here!

That explains why he comes up with the test.

You’ll find him keep letting you make decisions throughout a date, from choosing the movie to the restaurant and other activities. You can easily realize this is a test as normally this Bull guy is determined. If you say something like anything is okay and he can choose, then you completely fall into his trap.

Be confident and trust your intuition, and then go with choices that you believe both will surely love.

2. He won’t lend you a helping hand

It’s not that he won’t help you with everything, just certain things.

When looking for a partner, Taurus man needs to be with someone whom he can share his burden with. To him, an ideal couple is a pair in which two individuals can encourage and support each other all the time.

He will soon lose interest if finding out you’re too needy or in need of his assistance in every minute. Normally Taurus man will help you with a lot of things as he’s protective and considerate. But, if he refuses your requests all of sudden and keeps using the busy card, then he is testing you for sure.

This guy wants to see what you will do if having to cope with difficulties on your own.

Never complain or get angry when he’s not there to help you. Show him that you’re an independent woman who can accomplish the challenges well by yourself.

Did you know that people born under this sign is very honest?

Due to that, Taurus man values the truth than most things, especially in a romantic relationship. He expects a deep, genuine connection with the person he loves, not just an affair in which no one trusts each other.

I have to say that what he hates the most is finding out their partner hide something from him. The feeling of being lied is annoying. In case he doubts that you’re suspicious, he’ll try to catch a lie from you.

Is he recently asking you some weird questions?

That’s another sign telling Taurus man is testing you. His questions somehow will force you to come up with a lie. Be worried about it because he can discover the truth with ease.

Make sure you’re always honest to your Taurus partner. I don’t mean that you should report him every personal thing of yours, but remember to never tell lies or say something not true.

Why Does Taurus Man Test You?

There are 2 main reasons for his act:

Taurus man really wants to know if you’re with him because of his materials only. Besides, he hates when you see him as the 2nd choice or just call him and ask for a shoulder to cry on. This guy tends to invest a lot in a relationship, so he must be sure whether or not you’re trustworthy and a good person.

2. He needs to make sure you’re reliable

To be in a relationship with a Taurus male, you must be loyal. He doesn’t like people lying to him, so at the beginning he will test to see if you tell him the truth or frequently act suspicious. Not only honesty, but he also needs to know if you are true to yourself or not.

When both are together, don’t try to be someone else. Just be real, genuine, and comfortable around him. Never make up your background to lie to him. Stay direct and straightforward all the time.

So, is Taurus man testing you?

Keep in mind that Taurus man hates playing mind games in love; instead, he rather makes a safe move. When he tests you, it’s because he craves to know if you are completely compatible with him.

It will be good for both if the testing results show that you two get along well together. The best thing to cope with this Bull is to be honest and loyal to him. He may be quite a stubborn guy, but he always listens to your opinions. Try to have a conversation if you feel that what he’s doing are driving you both apart.